I, Tonya is written by Steven Rogers (52) and directed by Craig Gillespie (50). It lays out the story of the life and career of figure skater Tonya Harding (47). Of special interest is the 1994 attack on Nancy Kerrigan, Harding’s rival and Olympic teammate.

Margot Robbie (27) is excellent as Tonya Harding. Exceptional, is Allison Janney (58) as LaVona Fay Golden, Harding’s mother. She is the mother that could be held up to anyone who thinks their mother was not quite up to what they would have liked. She drove Tonya Harding to skate from an early age, even although her daughter was not too keen herself. For me, Allison Janney made this film, as I enjoyed her performance so much.... [Read More]

The 75th Golden Globes 2018 was staged by the Hollywood Foreign Press Association in the Beverly Hilton, Beverly Hills, Hollywood. The stage setting was appropriate, and the atmosphere is slightly less formal than the Oscars as the audience is sitting around dinner tables. The show itself is faster, shorter, and more direct, and many people find it much more enjoyable to watch. Seth Meyers was an excellent host: pleasant and competent.

Molly’s Game (2017) is based on the memoir by Molly Bloom (2014). It is the true story, from her point of view. Principally photographed in Toronto, Canada, it is written and directed by Aaron Sorkin (56). He is an award-winning writer, of such things as A Few Good Men and The West Wing, and this is his directorial debut. It would appear that working with good directors has taught him a lot, as his direction of this film is competent and professional. I found his fast conversations as people were moving around, a little hard to follow at times. Perhaps if I knew more about Poker and the running of a Game, I would have found it easier.

Jessica Chastain (40) plays Molly Bloom with conviction. I wonder if the real Molly is always as serious as she is depicted. This is the story of a driven woman, highly intelligent and beautiful, but with no apparent sense of humour. She is an excellent business woman, in what could probably be called more of a man’s world. She even gets lightly beaten up by the Russian Mob, and survives. The FBI were almost too much for her, but she managed to get out of their clutches with much less damage than might have been expected. There doesn’t seem to be a lighter side to her character. This means that there is not a lighter side to the film.... [Read More] 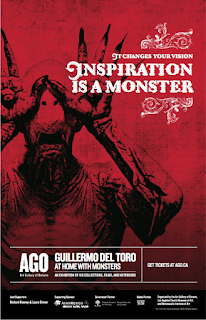 At Home with Monsters by Guillermo del Toro, showing presently at the Art Gallery of Ontario (AGO), is an incredible exhibition. A collection of pieces from Bleak House, del Toro’s home outside Los Angeles, this is the personal collection of a creative mind that sees monsters as the darker side of each one of us. He believes that we have to recognize and face this side of our inner world so that we can make peace with it.... [Read More]

Dunkirk (2017) is written, co-produced and directed by Christopher Nolan. It is a highly professional production in every way.  The music, by Hans Zimmer, is amazing, and heightens the tension throughout the film. He uses the auditory illusion of a Shepard tone to great effect: brilliant and beautiful! This film is the creation of its director, and is Art! No doubt it will appear in the Oscars. It won’t be surprising if it wins the Best Picture award.

Taken as a fictional recreation of the evacuation of the British Army from the beaches of Dunkirk, in France, from May 26 to June 4, 1940, Dunkirk allows us to imagine how it must have been for the people involved. We experience it from the beach at Dunkirk, on the sea in the large ships and little ships, and in the air from the cockpit of a Spitfire. We feel the tension: the boredom of waiting; the terror of being bombed; the dangers on the sea and in the air. We see how ordinary people were affected by the events. As an imagined sliver of time in that place, this is an amazing film. It does have the feeling of being a documentary. The direction could perhaps have been tightened up at times as it even felt a little boring. On the other hand, as has been said, war has its times of boredom. Without the music to convey tension, would Dunkirk have seemed a little dull?... [Read More]

Darkest Hour (2017) is a British biographical war drama, directed by Joe Wright (45) who is known for his Pride and Prejudice (2005), Atonement (2007), Hanna (2011) and Anna Karenina (2012). I liked his direction of Darkest Hour. His is the hand of a master. The screenplay is written by Anthony McCarten (56), a New Zealander best known for his script of The Theory of Everything (2014). I loved the subtle touches of British humour that lightened the grimness of the situation facing Churchill and the British people. Both Churchill and the Brits had a sense of humour, even in such dire times. The cinematography by Bruno Delbonnel (60) reflects the gloom that shrouded Britain, faced with invasion by the Nazis. The music by Dario Marianelli (54) is highly original, and appropriate. Altogether, Darkest Hour is the production of highly experienced professionals.

Gary Oldman (59) as Sir Winston Churchill is outstanding. He is an award-winning British actor and was a member of the Royal Shakespeare Company. This shows in his acting. His performance as Churchill may win the Oscar for Best Actor. I can’t think of any other actor who has come up to this standard this year. Kristin Scott Thomas (57) as Clementine Churchill is excellent, as are all the rest of the cast in their parts.... [Read More]

The Shape of Water (2017) is a dark fantasy, drama film. Having seen Pan’s Labyrinth (2006) directed by Guillermo del Toro (53), I had to see this film. It did not disappoint.  The direction is that of a master. The screenplay is written by del Toro and Vanessa Taylor. Perhaps it is because it is written by a man and a women working in collaboration, the screenplay is balanced and excellent.... [Read More]

Three Billboards Outside Ebbing, Missouri (2017) is written, produced and directed by Martin McDonagh (47). It is ranked as a black comedy, crime film.

Born in England of Irish parents, McDonagh has a full career of writing plays and films. He won an Academy Award for his first short film, Six Shooter (2004), and was nominated in the Oscars (2009) for Best Original Screenplay for In Bruges. His work has matured, and he has become a master of the craft and art of creating a film. This film is the best film I have ever seen. The direction and screenplay are beyond criticism.... [Read More]

Anyone here seen Star Wars: The Last Jedi? If so, what did you think?